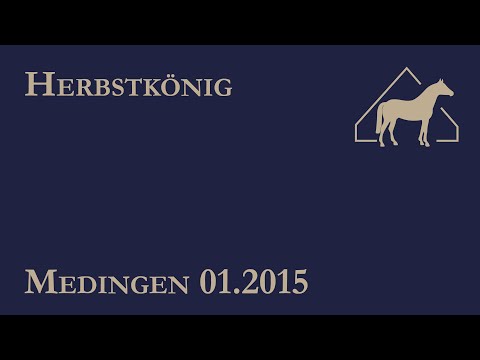 With his elegant appearance, Herbstkönig, the runner-up at the Trakehnen licensing in 2010, captures the hearts of the Trakehnen breeders. The bay premium stallion represents the ideal type of a sporty nobleman. “Type, interior, exterior formed by blood, basic gaits, jumping – he provides everything. He is the most completed stallion of the year” was the comment of breeding leader Lars Gehrmann in the licensing report.
Herbstkönig comes from the best lineages of the Trakehner breeding: Formative blood by his grand sire Consul by Swazi xx and inbred to the influential British full blood stallion Pasteur xx through his great grand sires, the full brothers Mahagoni and Marlon. Herbstkönig's pedigree therefore contains more than 36 per cent full blood. He comes from the family of Herbstlicht (T14O1), which is rooted in one of the most important mare families of the former main stud of Trakehnen.
The impressive mare Herbstlicht, being one of the few Trakehner daughters of Hanoverian lineage founder Semper Idem, was regarded as especially valuable for breeding; in an overview her family is one of the best.
Herbstkönig's maternal lineage is valuably completed by the advanced level show jumper stallions Timber and Caanitz as well as the show jumper providing stallions Carajan and Gunnar.
Dam Herbstlied V provided licensed stallion Herbstklang by Kasimir, who was as a three year old highly placed in young horse championships in 2010.

Video of Herbstkönig and Theresa Wahler from May, 1st 2013.